Posted on 23/03/2021 Posted By: iwcwebeditorCategories: Inspiring Stories in Moscow

Russia is a huge multinational country, where absolutely all peoples and ethno-cultural groups drink tea.

At the time of the Russian Empire, the state included the Kingdom of Poland, the Grand Duchy of Finland, the territory of today’s Baltic States (Ostsee provinces), Georgia, Armenia, Central Asia and even Alaska, coming to its climax of 23 000 000 square kilometers in 1866. It is not surprising that tea does not appear in different regions of this huge country at the same time.

In Central (Middle) Asia, Chinese tea shows up between the IX and XI centuries while in the Far East and Siberia it appears no later than the XIII - XIV centuries. If we are talking about the region of concentration of the Russian ethnic group properly speaking, that is European Russia, and, in particular, Moscow tea comes here no later than 1638.

It is in this year that the Russian ambassador Vasily Starkov hands over to Tsar Mikhail Fedorovich a gift from the Mongolian khan - 64 kg of tea. The overseas drink did not like neither the Russian monarch nor the his boyars (Russian nobles). This is quite understandable: in Russia, they traditionally drank hot herbal sbiten, decoctions of currant, strawberry, lingonberry, oregano, rosehip, St. John's wort, thyme, linden, mint, and other local herbs.

Initially, camellia sinensis was used as a medicine, in particular for stomach problems, by the Tsar family and his inner circle.

Only since the end of the XVII century in the royal court and boyar houses they come to the understanding that tea is a delicious and healthy drink that can be drunk daily and several times a day, if finances allow.

In the 18th century tea became a frequent guest in noble and wealthy merchant families, and by the middle of 19th century tea was distributed everywhere. It is drunk by burghers, wealthy peasants, and visitors of the so-called "tea shops", designed to combat alcohol abuse.

Initially, tea to Russia started being carried by caravans much earlier than English clippers loaded with camellia sinensis and spices sailed with their precious load from China and India to misty Albion.

Camel herders, guards (Cossacks), merchants themselves, coachmen, customs officers, quality inspectors and a lot of other people participated in tea traffic from central China, through Mongolia to Russia and further to Europe.

If you calculate the time spent on preparing the caravan, buying goods for "export", moving to the “Middle Kingdom”, unloading and trading itself (for a long time it was a barter exchange "goods for goods"), than loading Chinese goods and returning to the motherland, you get impressive figures of up to three years!

By the way, since the XVII century, Russian caravans to China carried mainly furs. In those days Russian merchants dressed up both the European elite and the Chinese nobility in Siberian furs. At all times the fur was a status item!

Not only black tea which has a longer storage life, but also more precious green and rare yellow tea of the emperors were reaching central Russia.

The Great Tea Road in numbers

The total length of 10-13 thousand km, depending on the chosen route and the final point-Moscow or St. Petersburg.

Tea at the emperors and aristocrats. Tea on the table of the «lower strata of society» 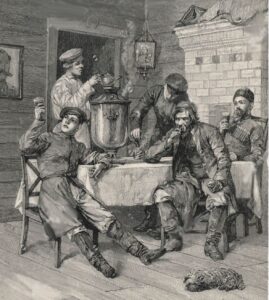 The role of tea in different strata of Russian society is a bottomless topic in its socio-cultural and purely commercial significance.

Surprisingly, already in the XIX century, tea was drunk not only by representatives of the nobility, but also by merchants and wealthy peasants.

Let's start with the blue bloods. Russian tsarist elite initially perceived tea as a medicine, but after Peter the Great, the consumption of it became part of the everyday life of Russian emperors and high society.

It is known that the Emperor Alexander I was a connoisseur of green tea.

Nicholas I also drank tea. So, his trip to Stockholm in 1838 was accompanied by evening tea parties of Russian nobles with representatives of the European nobility.

By the way, for travelers in XVIII - XIX centuries were made special tea sets - the so-called "pohribtsi", - containing, as a rule, a set for two persons: 2 teacups, the spirit lamp to heat tea, a jar to with tea leaves, a kettle, a small container for alcohol and a tin can to store sandwiches.

In merchant houses, tea drinking was organized on a large scale often becoming a show off, emphasizing the wealth and importance of the family: with the indispensable pies, gingerbread, cakes and chocolate; tea was often drunk from a saucer, and sugar was usually bitten off with the front teeth - hence the expression "drink tea biting sugar". It is to merchants that ascends the recipe of "tea with gilding", that is with a rum coating, which gives the tea a golden glow.

Tea drinking could take hours. Long conversations were held on everyday topics and about metropolitan life, as well as business negotiations, if partners gathered at the table. 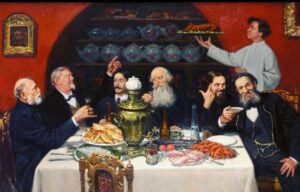 For a long time (until about the end of the XVIII century), the area of distribution of the drink in Russia was very small.

Almost without exaggeration, we can say that tea was drunk mainly in Moscow. And this situation, with minor changes, persisted until about the 60-s of the XIX century.

Since Moscow was the main market for tea (until the mid-nineteenth century the city consumed up to 55-60% of the all tea volume imported into Russia), a significant part of the wholesale trade was concentrated there. It was run by legendary Moscow and Siberian merchant dynasties of Popoff, Gubkin, Botkin, Kuznetsov, Kuzmicheff, Perloff, Kotuar etc.

The consumption of tea in the Russian Empire varied greatly depending on the provinces and the prosperity of peasant families. 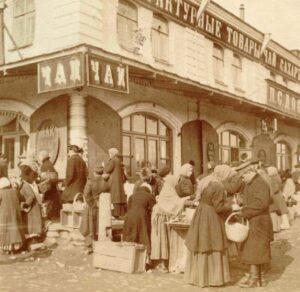 Judging by archival data and memoirs of contemporaries, a significant number of tea-loving peasants of European Russia lived in the Moscow and Yaroslavl provinces.

In the works of Russian painters of the XIX - early XX centuries, you can often see peasant families drinking tea.

In the old engravings, we see both the urban and rural poor at the festivities, types of fair trades. Samovars pop up everywhere and the comments emphasize that they drink tea, not sbiten’.

Foreigners visiting Russia in the XVIII - XIX centuries, testify: «Russians, even the poorest, have a teapot and a copper samovar at home. In the morning and evening they drink tea with their families ... the rustic simplicity of their home forms a striking contrast with the elegant and delicate drink that they drink in it».

Here is a voluminous, but important quote for us, written in 1839 by Marquis de Custine about tea drinking in a peasant's hut:

«It still stinks of sauerkraut and tar. In this nook, which is stuffy and dark, because the doors are low and the windows are no bigger than those in the attic, I see an old woman pouring tea for four or five bearded peasants, who are dressed in mutton coats with the fur inside. A brass samovar and a teapot sparkle on the table. The tea here is just as good, expertly brewed, and if you don't want to drink it just like that, there is good milk everywhere».

The second half of the XIX century gives us a huge array of photos of family holidays and feasts, where we see family tea parties around samovars. Aristocrats, workers and well-to-do peasants can be seen on them.

There are many ethnographic descriptions of the XIX century that the peasants served tea at engagements and weddings.

«Kyakhta tea and Murom kalach (kind of bagel) - the rich man has an afternoon snack!» so our ancestors used to say in the XIX century.

The phrase "Russian tea" can cause confusion outside of Russia. However, this is quite an independent phenomenon. Unlike continental Europe, where it is customary to drink infusions of herbs or China and India, where they use camellia sinensis in its pure form, "Russian tea" involves mixing black tea with other herbs and berries. Historically, this is due to the desire to reduce the cost of tea, as well as the richness of the Russian flora and the cold climate, which encouraged the creation of more colorful drinks, charged with vitamins.

The brand has been developed in 2018 by the branding agency Dream Catchers: It tells the story of a multi-faceted and multi-ethnic Russia in the language of tea blends, folk costume and various historically verified illustrations and texts.

It has a gastronomic, educational and even unifying value, since tea is the only drink that is on the everyday table of any of more than 200 ethno-cultural groups living in Russia.

In November 2019, SUGREFF was recognized as the best gastronomic souvenir of Russia in premium segment (according to the results of the federal stage of the Tursuvenir competition) and gained popularity not only among ordinary consumers, but also among public people, including fashion guru Vyacheslav Zaitsev, ballet guru Nikolai Tsiskaridze, Foreign Minister Sergei Lavrov, politician Irina Khakamada, well-known journalist Nikolai Svanidze, writer Natalya Solzhenitsina and dozens other famous people including President Putin’s daughter Ekaterina, who received a SUGREFF chest from the hands of her scientific opponent after defending her dissertation.

Kindly Wrote for IWC by SUGREFF