Posted on 21/05/2021 Posted By: iwcwebeditorCategories: Donation 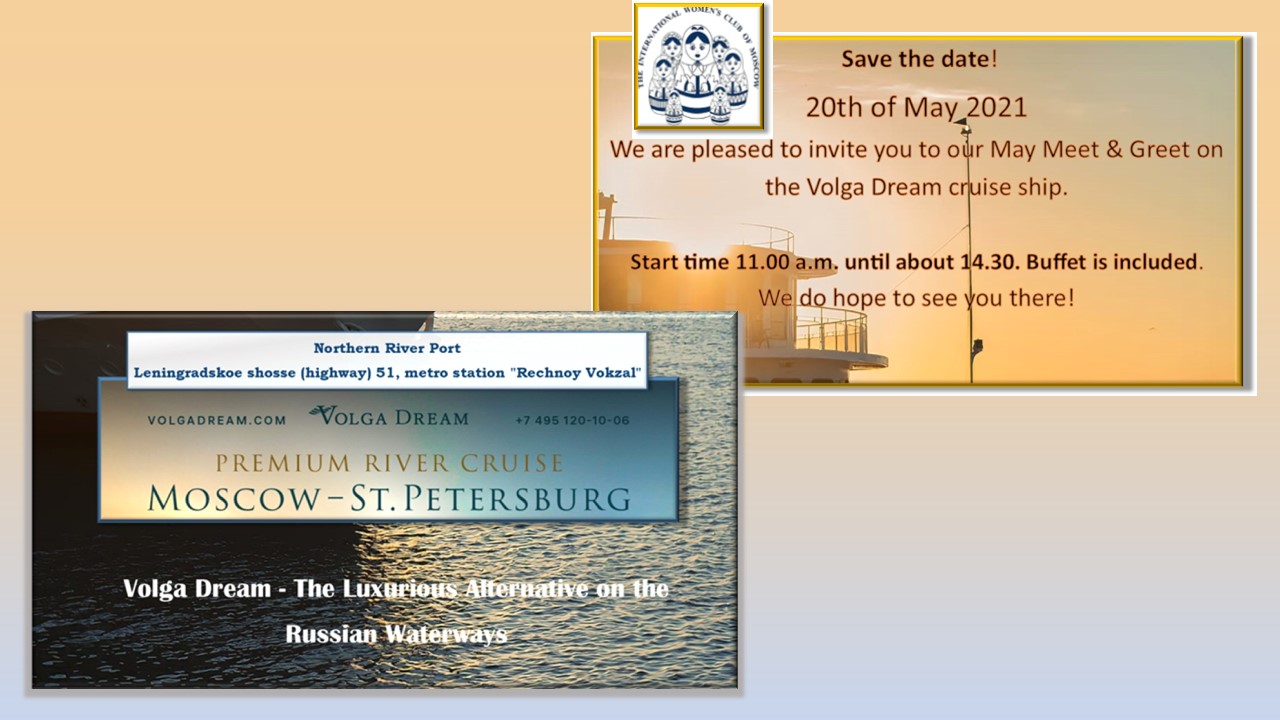 On Board of the Volga Dream

The International Women's Club of Moscow organized on 20th of May 2021, the first Meet&Greet after the Covid-19 pandemic. We were glad to be hosted on board of the Volga Dream tasting good food, drinking good wine and winning amazing Raffle prizes from our donors.

Let's read all together this article kindly wrote exclusively for our Club.

In the last few months, the new word, “Staycation” has entered our vocabulary. Many people are currently looking for ways and places to get away from it all while staying in Russia.  It is a big country and there are lots of possibilities, but we’d like to introduce you to one of the best.

If you’re familiar with Moscow or St Petersburg, you’re sure to have noticed the many bridges and water features, like locks and sluice gates. You might not have known that they are just a small part of a network of waterways that span almost the whole country.  Those rivers and canals were once arteries for trade, linking east and west, with various exotic goods flowing in both directions.

The waterways are still there and have long been popular with holidaymakers from Russia and around the world. Volga River cruises have always been amongst the most prestigious and, in the Soviet heyday, were the preserve of senior party officials and loyal apparatchiks. 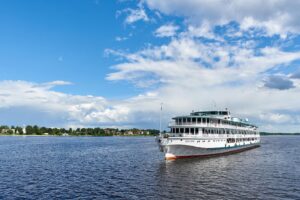 May we introduce, the Volga Dream?  The only family owned and operated cruise ship on the Volga and, due to her size, we think she’s the most exclusive too. For 15 years she’s been a popular choice for wealthy and discerning travellers from the USA, Great Britain, Australia and Europe, enthusiastic travellers who are keen to see the real, authentic Russia.  Many guests have been so impressed that they became regular Volga Dreamers! Some of their reviews and comments can be found here:

The voyage takes you along the majestic Volga river, from Moscow to St Petersburg, or in the reverse direction.  The river’s rich trading history has left a fascinating legacy, which means your trip is more than just an A to B journey, it’s an adventure through history and culture. Your ports of call include some truly breath-taking sights covering Russian history from the ancient Rus, through the various tsars and the Soviet Era.

Our well-appointed and luxurious ship sails gently along the Volga through spectacular, unspoiled countryside, stopping at some of the most historic ports of call along the way.

Uglich is one of Russia’s oldest towns and part of the famous ‘Golden Ring’ that surrounds the capital. It was founded under the last Varangian Prince, Igor, and once held out against the Mongol invasion, but its bloody history didn’t end there! The ancient walls witnessed the grisly murder of Ivan-the-Terrible’s young son, Dmitri. The impressive Church of St. Dmitri-on-the-Blood, with its classic onion domes and blood red walls, was built in his memory and represents a fine example of classic Russian architecture.

Yaroslavl is the oldest city on the Volga and now a UNESCO World Heritage site with a wealth of ancient orthodox treasures. The Spassky Monastery boasts an impressive church adorned with murals depicting St. John's apocalyptic visions. Another is decorated with an awe-inspiring selection of rich frescoes. The city welcomes visitors with a costumed reception at the Governor’s House for a real taste of pre-revolutionary Russia.

Goritsy is a peaceful village near the shores of Lake Beloye (White Lake), once known as the “tsar’s fishing grounds”. A place so serene that ancient monks chose to build no fewer than 3 holy sites including the Ferapontov Monastery. Listed as a UNESCO World Heritage site, its chapels house magnificent frescoes by Dionysius, one of Russia’s best known icon painters. The Kirillo-Belozerskiy was founded in 1397 to bring devotees “closer to God” and in the time of troubles, it provided refuge for many fleeing noblemen and women. The fortress has successfully repelled several invading armies but in modern times, the town is much more welcoming!

Kizhi is arguably the most picturesque stop along the way. This island village, set in an area of outstanding natural beauty, consists almost entirely of ancient and traditional wooden buildings from “old Russia”. One of the newest is the famous Transfiguration church, which was built as recently as 1714! Remarkably, and in testament to the craftsmen of old, not a single nail was used in its construction.

Mandrogi is a rural hamlet brought to life by warm and welcoming villagers. Locals invite guests to sample classic Russian fare such as tea with jam and “pirozhki” (local pies) while enthusiastically revealing all they know about Russian traditions, lifestyle and proudly showing off their lovingly tended kitchen gardens.

Between these amazing visits and photo opportunities, comfort and fine dining are key elements of the Volga Dream 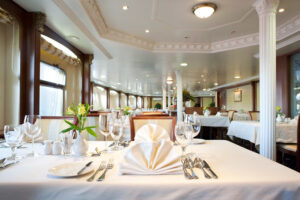 experience. Our cordon bleu chef takes great pride in preparing the mouth-watering cuisine you might expect from the finest restaurants.  It’s no exaggeration to say that praise for the high standard of food is one of the most common themes in reviews and feedback from guests. Please let us know in advance of any specific dietary requirements.

Because we are a family owned and operated business, we take great pains with our recruitment policy.  Every member of the hospitality crew is personally hand-picked by the owner. They all love what they do and speak English, so on-board communication is never a challenge, and a high level of service is assured. 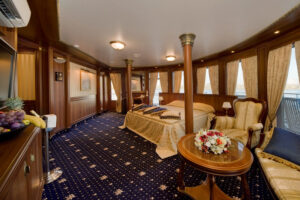 Guests can always spend their time relaxing on the open deck with their favourite drink but there’s also a choice of optional activities, from cooking lessons to talks on Russian history presented by our resident professor.  We have a concert pianist on hand to perform regular recitals of Russian classics.  There’s also one member of the team who we always hope won’t be busy, we always have a doctor aboard, just in case!

So, however long you’ve lived and worked in Russia, a Volga Dream cruise will open up a whole new view of the real country, safely, sociably and comfortably.  We suggest booking early to secure your preferred dates or for more information check our web site www.volgadream.com or call us at +7 495 120 1006 (our consultant speaks English).

Day and time: once a month, as agreed by the group Location: Moscow’s Parks Short description of the activity: Moscow is full of beautiful parks – let’s discover ...

Day and time: Monday 1:00 pm – 4:00 pm Location: near metro Kropotkinskaya Short description of the activity: The group is about getting together and making friends. We ...

IWC Playgroup is a meetup group for mommies (or daddys) and children aged 0-6 years. We will try to meet up every week at different ... 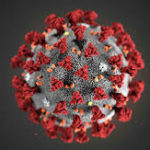 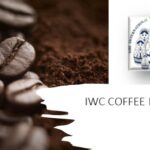 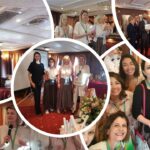 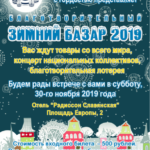 The Winter Bazaar is an amazing one-day shopping destination featuring countries from all over the world, with live music and dance in a festive, lively atmosphere. This annual tradition and cultural icon is one of Moscow’s longest running shopping and music festivals attracting up to 4,500 shoppers each year. 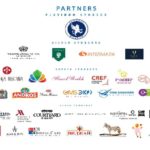 To reach our Charity goals and help as many people as possible, we need the help of all those who can and want to contribute to the good of the disadvantaged.